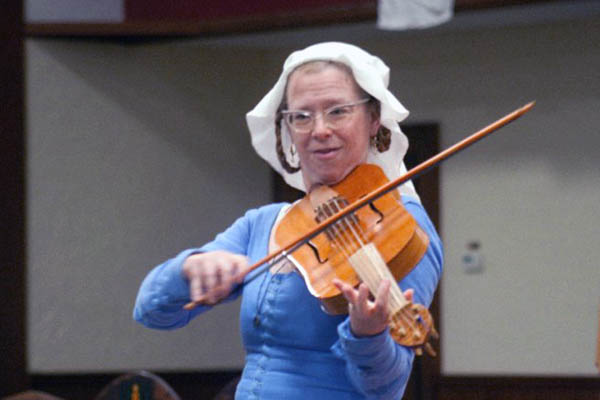 Bertran de Born's famous late 12th C. poem "I love the gay time of spring", celebrating warfare. Dante consigns Bertran to the 8th circle of his vision of hell; this poem, with it's glorification of the violence and mayhem of war, is a likely reason.

This is the first trobaritz poem I wrote a melody for, after falling in love with the imagery of the 1st stanza in particular, with it's depiction of winter.

This is one of the Countess of Dia's 4 surviving poems. She is the only trobaritz with a surviving melody, the famous A chantar m'er.

By Gaucelm Faidit
trans. by Owen Alun and Amelie d'Anjou

This is a lament on the death of Richard the Lionhearted.

This is one of the first songs I learned, but it's gone through some transitions. The format of this poem is so sophisticated that pinning down the rhythm is a challenge. Just to be different, I now perform it in 5. Version 1 is my literal transcription of the ms, while version 2 is how I perform it.

I was going to write an essay about it, (someday I may still do that,) but then I found a good one already out there, which is essentially using logical argument to defend the default choice of most recorded versions, and can be accessed  here   or  here

Song of Nothing (sheet music)

by  Guilhem VII Count of Poitiers
Music by Amelie d'Anjou, Translation by various
William was Eleanor of Aquitaine's grandfather, and the 1st troubadour whose poems we have. Several of his poems are dirty; this one is a parody of a genre we don't have previous examples of. The best example of what he is parodying is probably Jaufre Rudel's Lanquan li jorn about his far-off love.

I took some classes on Franconian notation and these estampies in particular, and ended up transcribing all of them. Some of the rhythms are slightly different than other editions that you've seen. Also, la Prima Estampie is missing the 1st 2/3rds, so I reconstructed that (ie made it up). The teacher really really liked my version, so here it is.

Why Does My Husband Beat Me? (sheet music; performance)

music and rhyming translation by Amelie d'Anjou
Anonymous trouvere poem of the mal-maris (or bad husband) genre. This one is more fun than some other mal-maris.

Some Cantigas d'amigo, or Songs of a friend

should be 3 or 4 more cantigas here

Transcriptions from Songs from British Sources 1150-1300 by Helen Deeming

This is a cool book from the Musica Britannica series, publ in 2013. Most all are presented without rhythm, so I am going through and editing my own versions. Over half the songs have not been published before!  I consulted the manuscripts when they are online.

This one had issues - I think version 1 is what the ms says, but it's illogical. My rhythmic interpretations, of course.

anon 13c song in Latin, rhythm by Amelie   This one because dragon!

anon 13c song in Latin, rhythm by Amelie
It's about the BVM silly! Dedicated to Saraswati on her elevation.

anon Anglo-Norman song c.1200, rhythm by Amelie
Dedicated to Andreas on his elevation.

more added as I transcribe them

Of oon that is so fair and bright (sheet music)

The Tongue is most Enemie to Mankind (sheet music; performance)

The earliest polyphonic music we have extant is from Aquitaine, written at the monastery of St. Martial. Very similar is some music at Santiago de Compostela. Most of it is 2 parts, although there are 3 part pieces, one from Compostela and the other in a related manuscript from England. If you've taken music history classes, they will talk about the Notre Dame school in Paris, but this music is about a generation earlier. The following pieces are ones that I have transcribed into modern rhythmic notation, based on the relationship between the parts, with an assumption of generally one beat per syllable assuming not too many notes/neumes, and that this is coming out of a tradition of improvisation. I consulted Theodore Karp's The Polyphony of Saint Martial and Santiago de Compostela, Hendrik van der Werf's The Oldest Extant Part Music And The Origin of Western Polyphony and the manuscripts themselves when they are online. See my links page for the manuscripts.

This one has been recorded by Sequentia also, which you can hear here: https://www.youtube.com/watch?v=5qPNbWhc6g4

Here's a recording of Sequentia singing a version of this, perhaps a different ms, but very close. https://www.youtube.com/watch?v=mQpJcjUfkX0

A monophonic Christmas chant: I actually looked at about 6 different early manuscripts, several of which had no staff lines. The pitches come from later manuscripts and the Liber Usualis.
Transcription by Amelie